Kindergarteners are at a perfect age to play games with friends, family, or classmates. Board games, cards, and other fun party games are not only a fun source of social interaction, they also help the kindergarteners develop some crucial skills.

Sarah Gorden has been a teacher for ten years, more than half of those teaching either kindergarten or first grade. She says, “Games are a great way for families to practice skills like one-to-one correspondence, counting, turn-taking, sharing, number identification, and talking about rules and directions.” In addition, games can help kindergarteners work on problem-solving, strategy, communication, and collaboration.

This list contains 27 of the best games for kindergarteners. I recommend them because:

Disclosure: This post contains affiliate links, meaning if you click through and make a purchase, I may earn a small commission. As an Amazon Associate, I earn on qualifying purchases.

Best Board Games for Kindergarteners

These games for kindergarteners use a game board and game pieces. You may recognize several classics from your own childhood or as junior versions of familiar board games.

Bugs in the Kitchen

While playing the board game Bugs in the Kitchen, kindergarteners will use problem-solving, strategy, and a little luck to guide the bug into their traps. The game goes quickly, and will be fun for older siblings and parents to enjoy as well.

The classic game of Sorry! will help your kindergartener practice his counting skills as he moves his game pieces around the board. Moreover, this game will help teach sportsmanship as your young player recovers from being bumped back to start.

Kindergarteners will practice counting spaces while they race around the Monopoly Junior game board. They will be able to buy fun properties such as a burger joint or ice cream parlor. The game will help them understand making cash transactions and give them the chance to count out their dollars bills. If your kids have favorite movie characters, they might enjoy playing themed versions.

Kindergarteners can learn United States geography and practice problem-solving skills while playing this simplified version of Ticket to Ride. The players will use color-coded cards to claim railroad routes across the country, connecting major cities. The first to complete six tickets wins!

Even if your kindergartener is not yet a strong reader or speller, he will be able to play this younger version of Scrabble. On one side of the board, players try to match their letter tiles to words printed on the board. Once your child is old enough to build his own words, you can flip the board over for more advanced gameplay. You keep score by sliding a character along a track rather than having to add up points.

In the Operation game, players must carefully remove pieces from the “body” on the board without tapping the metal sides with the tweezers. This game helps kindergarteners practice patience and develop their fine motor skills. It also incorporates science because it can teach them about circuits! Kindergarteners can play this game with others or challenge themselves.

This is a simplified, pirate-themed version of the Settlers of Catan board game. Kindergarteners will learn strategy as they use their resources to build ships and hideouts. The first player to control seven hideouts wins!

Kindergarteners will love this active game, which practices putting items in a sequence. Be the first to complete a pile of pancakes that matches the sequence on your order card, and you win! You can also play this game as a relay race with multiplayer teams.

In the game of Connect 4, your kindergartener can win by getting four checkers in a row before her partner. In the meantime, she’ll practice creating a pattern (four in a row of the same color), along with counting and using strategy to block her opponent and win!

Sequence for Kids is another game that will allow kids to practice patterning. Players lay chips on the squares that match the animal cards they’ve drawn, but they will need to strategize to be able to get four of their chips in a row.

Hi Ho! Cherry-O is a fun game that will helps kids practice the skill of one-to-one correspondence. In addition, the author of this Moms Who Math article points out that since the goal of the game is to fill up a basket with ten cherries, it helps children practice working with breaking apart and putting together numbers within ten. My kindergartener is always working with ten frames, so I see the value!

In the game of Qwirkle, players use tiles to create lines that are all the same color with no duplicate shapes. Your kindergartener will practice spatial reasoning, patterns, strategy, and problem-solving, not to mention recognizing colors and shapes.

With this member of the Zingo family of games, kindergarteners must match number tiles with the spots on their “Zingo” cards that have the corresponding number of shapes. This helps with one-to-one correspondence: they need to figure out which numeral matches with the number of shapes on the card. It also allows them to practice number recognition. Alternate versions of Zingo help build other skills, such as recognizing sight words and letters.

Kindergarteners can use an oversized mat to practice addition and subtraction with Math Marks the Spot. They roll the dice to put together a simple math addition or subtraction function, then mark the answer with a marker or their bodies! What a fun way to learn math facts while being active.

This card set can be used to play sixteen different math games at varying levels, suitable for kids between 5-8. Kindergarteners will practice number sense, playing games where they have to make five or ten, or matching cards that represent the same number in different ways.

Here is an example of a game you can play with the cards:

Cooperative board games bring players together to accomplish a common goal instead of competing against one another. Either everyone wins, or everyone loses. These games will help kindergarteners work on communication with others, collaboration and teamwork, and cheering others on. 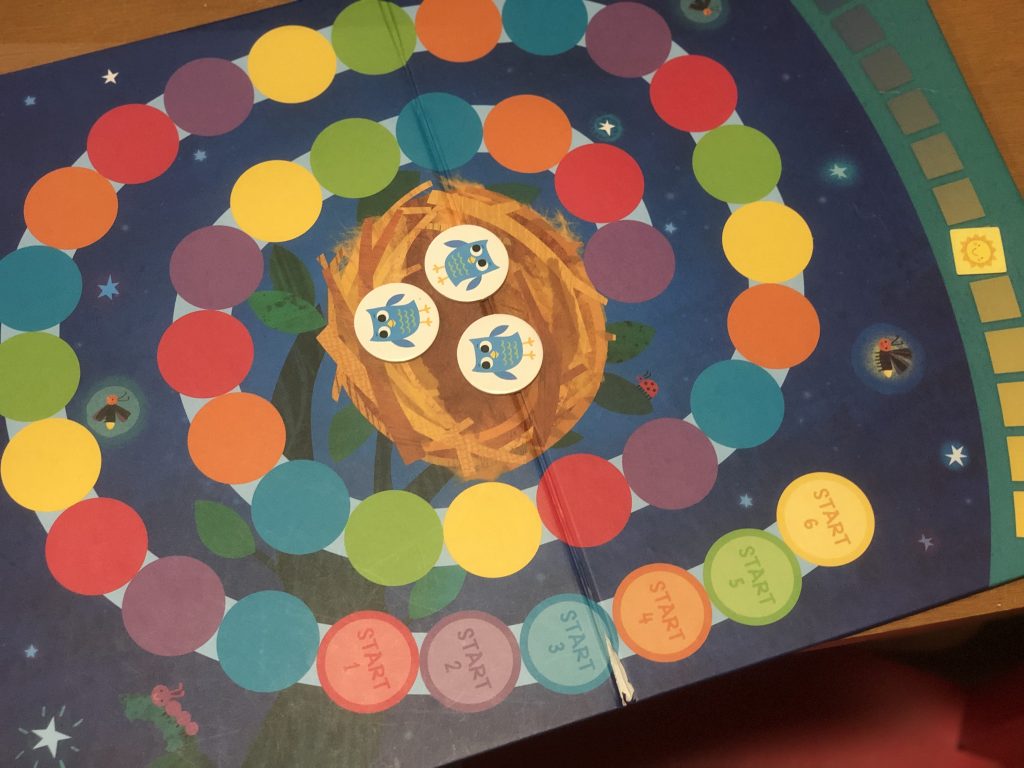 Hoot Owl Hoot is a favorite at our house. Both my kindergartener and second-grader enjoy playing, working together to get the baby birds home to their nest before the sun rises. Although not necessary to succeed, there is a bit of strategy that can be implemented as the kids grow older and better understand the way the game works.

This creative game requires players to work together to race through a maze and collect treasure while a timer runs down. Each player can only see one side of the maze. Kindergarteners will have to use communication skills and say directions such as “left,” “right,” “up,” or “down” to direct the other players how to move their piece. There are four different game boards that increase in difficulty, so the game will grow with your child.

Race to the Treasure

Race to the Treasure requires players to work together to build a path to beat an ogre to a treasure. The game helps kindergarteners practice communication and collaborative problem-solving because they must figure out the optimal way to build the path to get to the treasure while also collecting three keys along the way.

While playing Noah’s Animal Rescue, players work together to get all the animals onboard Noah’s ark before the flood hits. They must communicative and strategize together so that they can win as a team. The game allows for three levels of play that get more challenging.

Outfoxed! is a “whodunit” game similar to Clue, but it is cooperative in nature. Players must work together, using clues to discover which thief stole a prized pot pie. Kindergarteners will pay attention to detail and practice deductive reasoning as they rule out suspects and find the true thief.

This cooperative game for kindergarteners is sure to be a hit for any Disney fan. Players travel along a six-foot gameboard, exploring different realms such as Arendelle from Frozen and Radiator Springs from Cars. Along the way, they will stop to engage in an “I Spy”-type search, looking for iconic hidden items on the game board. If all players get to Cinderella’s castle before the clock ticks ahead to midnight, everyone wins!

More of the Best Games for Kindergarteners

Here are a few other games that don’t fit neatly into the above categories but will still be fun and skill-building experiences for kindergarteners.

In the classic game of Guess Who?, players ask questions and use logic and reasoning to determine the other player’s mystery card. Kindergarteners will practice skills such as description, forming questions, and comparing and contrasting.

My kindergartener and second-grader get a charge out of playing Picture Charades together. The game is great for pre-readers because they only have to look at the picture on the card they draw. Some of the pictures are a little hard to act out without using sounds or giving clues, so we use a bit of an anything-goes approach at our house!

Jenga is a fun game to introduce around 6 years old. Take one block out at a time and set it on top, but don’t topple the tower! Kids can get a basic introduction to engineering principles (that I still don’t understand) and, of course, learn sportsmanship. Someone has to be the one to knock it down, after all!

My daughter received Twister for her birthday, and it was an instant hit with her and my kindergartener. Your kids will giggle as they get twisted up on the Twister mat. Meanwhile, they practice listening to instructions and learning left from their right.

The card game Uno is one of my kindergartener’s very favorites. Players practice number and color identification and following instructions while having a lot of laughs along the way. Uno is technically for ages 7 and up, although my 6-year-old folows along well. However, there is a Junior version you can get if you feel your kindergartener is not quite ready.

I hope this list helps you find a new favorite family board game or two, and that your kindergartener learns while having fun. Maybe these games would be perfect additions to your New Year’s Eve tradition!

Simple Pizza Party for Kids: Everything You Need to Know

Smart Ways to Smooth Out Your School Morning Routine 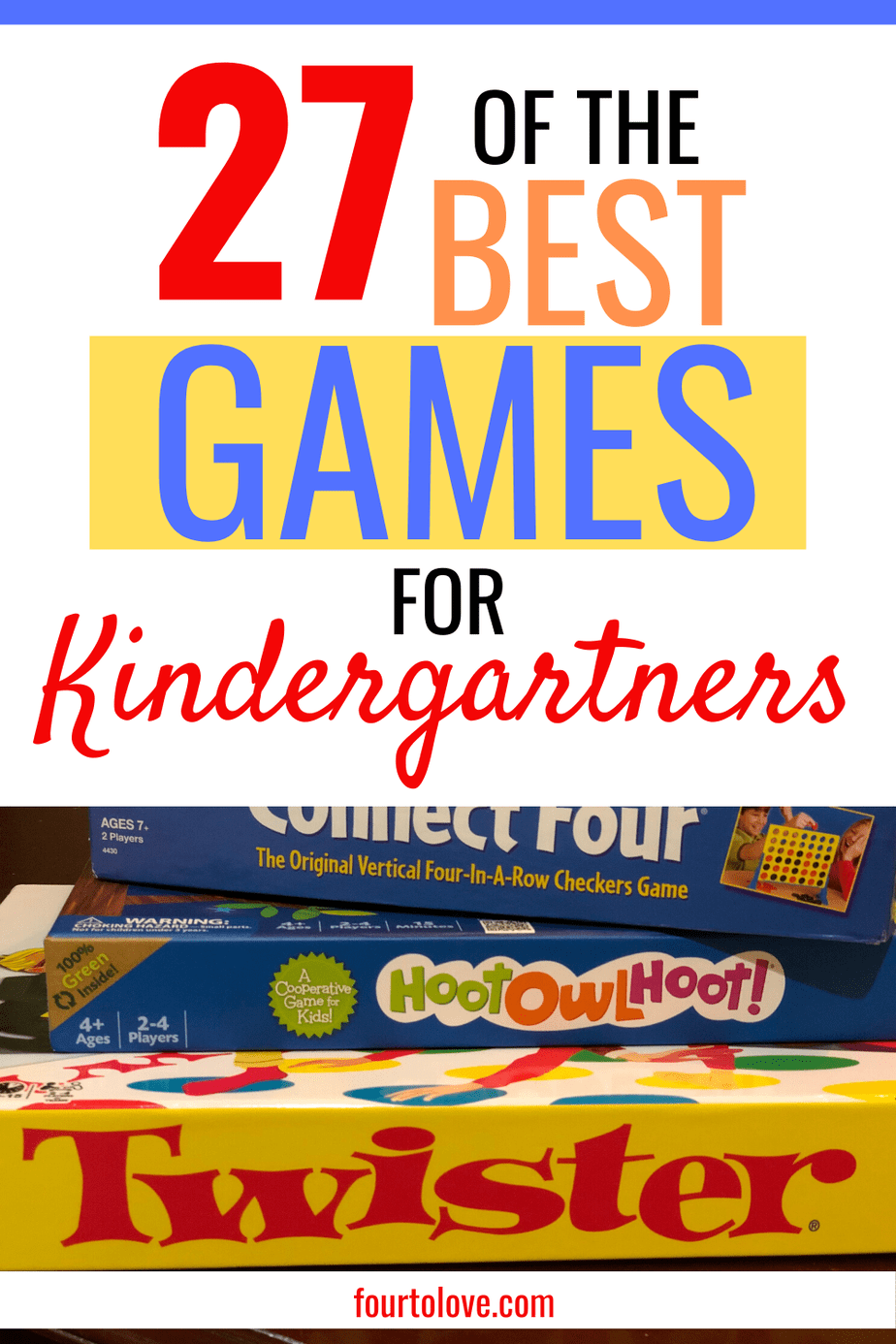 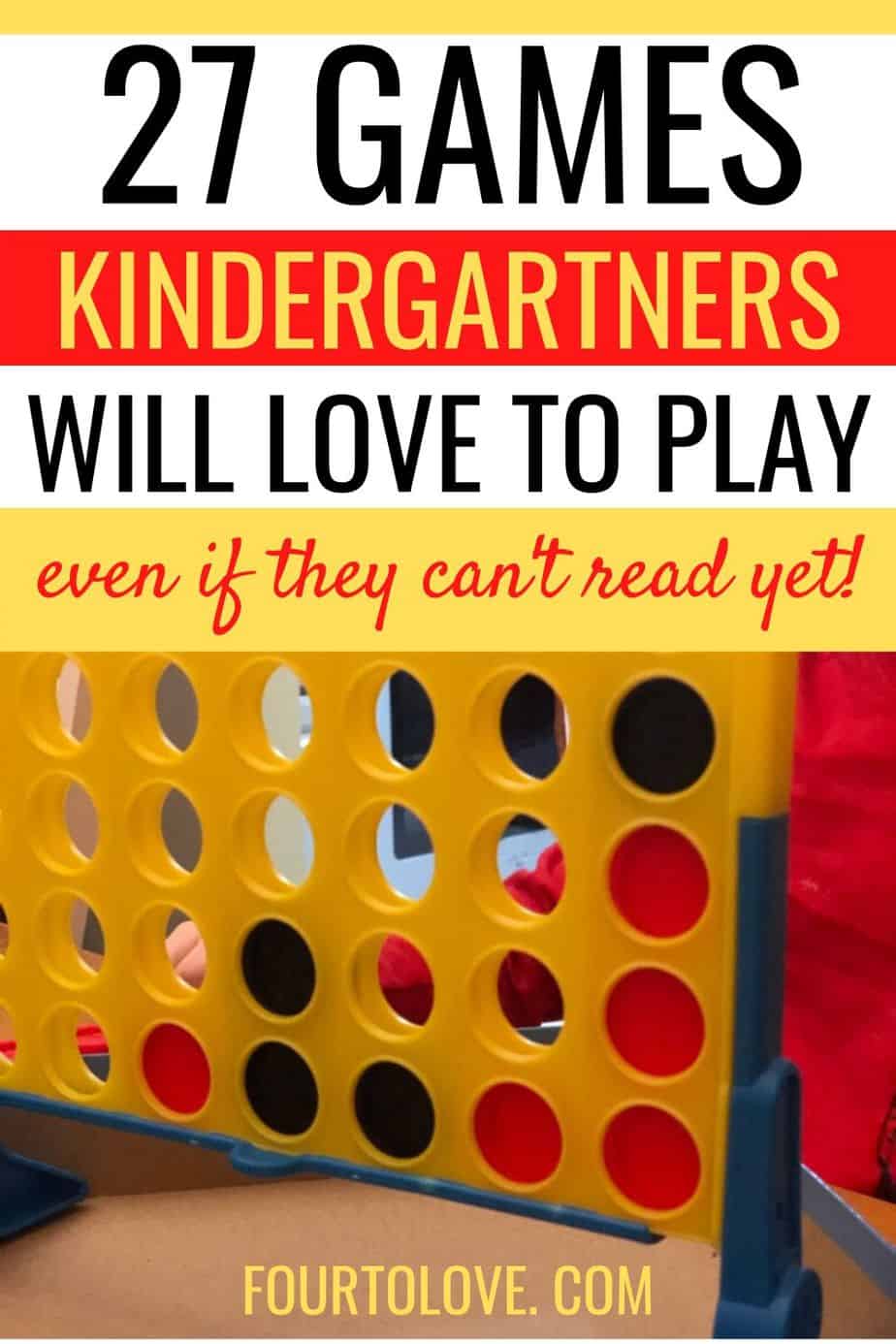 2 thoughts on “27 of the Very Best Games for Kindergarteners”