Almost seven years ago, I had just given birth to my first baby, and I was a hot mess.

I am a planner, a problem-solver. I had spent nine months devouring parenting books and websites, buying cloth diapers, and studying natural childbirth. I was going to crush this parenting thing. And of course, I was going to breastfeed my baby instead of feeding her formula. Why wouldn’t I? Breastfeeding was free, all-natural, and best for my baby.

And then my child was born.

I was completely exhausted from hours and hours of labor and childbirth (which, by the way, ended up involving Pitocin and an epidural), followed by a hospital room full of visitors and the overwhelming realization of being responsible for the life of another human being weighing heavily on my shoulders. And, oh yeah, I was supposed to be able to effortlessly feed my baby with my body. I had taken the breastfeeding class, after all.

It was not effortless. It was not easy. It hurt so badly. My nipples were cracked, bruised, and bleeding. I literally curled my toes in pain when she latched. Here I was—her mother—cringing when it was time for her to eat. My job was to keep her alive, which meant feeding her! And I couldn’t even do that right.

My mom and husband encouraged me to give her bottles of formula. Healthcare professionals assured me it would be fine. And when I finally caved and did, I had this wave of relief and satisfaction that I had actually fed my child! It was so easy, and she was so happy.

But at the same time, I felt so incredibly guilty. It is pretty much the default assumption now that a new mom is going to breastfeed. We live in a culture that celebrates and almost worships breastfeeding. And I know lots of moms who nail it right from the get-go and plenty of others who power through those initial struggles and come out having a successful nursing relationship with their babies.

But I just really wanted to feed my baby.

I didn’t want to nurse anymore. And pumping made me miserable. I wanted to bottle-feed formula. And I deeply wanted to believe that it was OK.

I scoured the Internet for validation, but so much of what I read vilified formula feeding and championed breastfeeding. According to my reading, my kid would be less healthy, less intelligent, and less bonded to me if I didn’t breastfeed! But, at the same time, if I was dejected and had nothing left of myself to give, my daughter was not only missing out on nutrition—she was missing out on her mom.

Finally, little by little, the guilt lessened and was replaced by… well, the joy of motherhood. After I finally stopped pumping and switched completely to formula-feeding, I began to find myself as a mother. The shroud of postpartum anxiety that had covered me since the baby was born lifted. With the constant feeding struggle out of the picture, I could embrace and conquer all the other challenges of motherhood. And not only that, but I didn’t have to worry about how my diet affected her milk, I knew how much she was eating in every sitting, and other people could easily feed her.

And you know what? She thrived.

She is a beautiful almost-seven-year-old. She loves to sing, takes ballet class, and is one of the top readers in her class. She has an adventurous spirit and a heart of gold. She is hardly ever sick. She adores me, and I adore her.

Past Me, I wish I could have shown you this post so that you could have known that everything would work out. And that you’d go on to have three more babies who were mostly formula-fed, and they’re all doing great, as well.

If you are a mom who is questioning whether it’s OK to go ahead and feed your baby formula, and you just want someone to tell you it’s fine — I’m here to tell you, it is absolutely fine. Even if you are not giving your milk to your baby, giving up breastfeeding might help you give more of yourself. 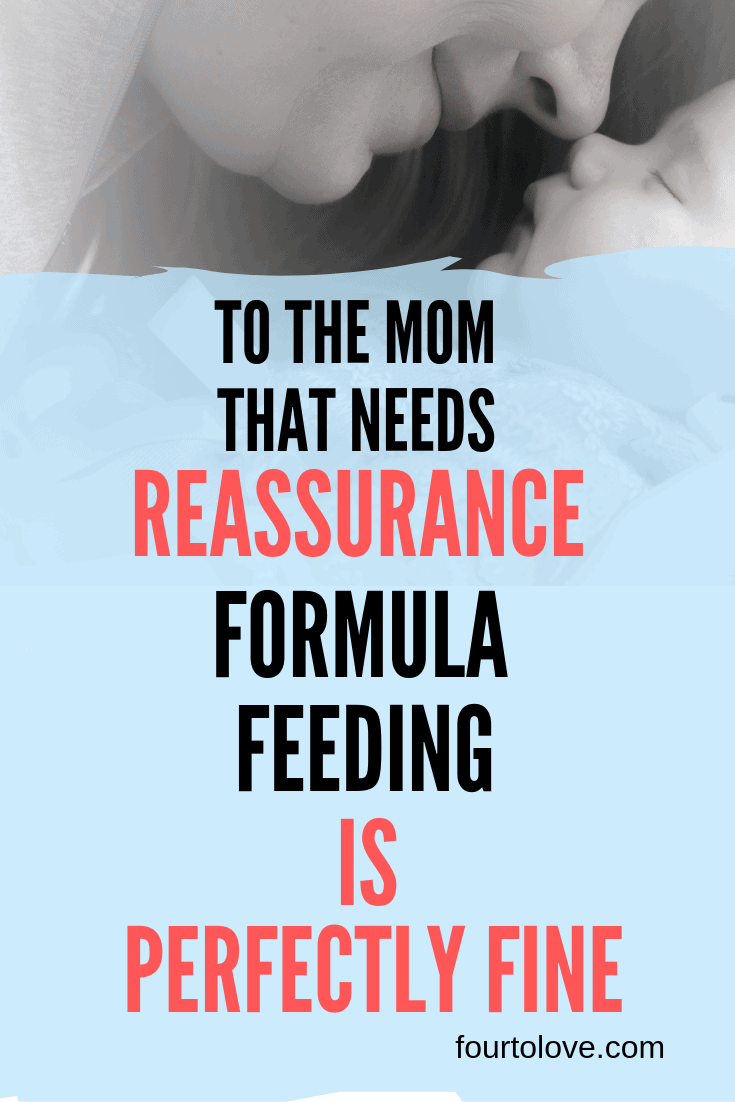 10 thoughts on “It’s Fine to Feed Your Baby Formula”